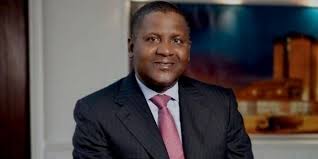 Why FG should ban export of maize- Dangote reveals

The Chief Executive Officer of Dangote Group, Alhaji Aliko Dangote, has explained why the Federal Government should place a ban on the exportation of maize.

Africa’s richest man said that the ban has become necessary in order to ensure food security in the country in the face of the ongoing war between Russia and Ukraine, which poses serious challenges for global food supply.

This was made known by Dangote while speaking at the 4th Annual Nigerian Food Processors and Nutrition Leadership Forum on Thursday in Lagos.

The forum was organised by the Aliko Dangote Foundation, the Bill & Melinda Gates Foundation (BMGF), and TechnoServe, under the Strengthening African Processors of Fortified Foods (SAPFF) programme.

Dangote acknowledged that the ongoing war between Russia and Ukraine would lead to scarcity of food, arising from the inability to access fertiliser.

The Russia-Ukraine war will lead to shortage of wheat, maize, urea
Dangote said that although the impact of the war might not be immediately felt in food production, he, however, pointed out that its ripple effect will be felt in the next 2 to 3 months in the country.

He said, “We would start seeing people exporting maize to earn foreign exchange which I believe we should stop. We need to grow more so we don’t have a shortage of food. It is about food security and it’s serious.’’

Dangote said that Russia and Ukraine produced about 13% of urea, 26% of potash, and one of the largest producers of phosphate globally.

He called on stakeholders to engage with the federal government to come up with likely solutions that will help reduce the impact of the supply chain challenge in the country.