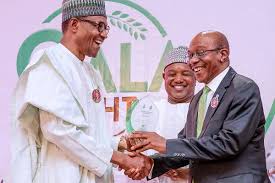 Why CBN continues to give credit facilities to FG- Emefiele

The Governor of the Central Bank of Nigeria, Godwin Emefiele has explained why it has continued to extend overdraft credits to the federal government via a policy termed “Ways and Means”.

The Governor noted  the reason why the apex bank continues to support the government through ways and means is part of its responsibility as the lender of last resort to the country.

Godwin Emefiele cited a drop in oil prices, two recessions, and the covid-19 pandemic as a combination of economic challenges that decimated the revenues of the government.

He also stated that what they did is not new claiming other central banks around the world do similar when faced with an economic crisis.

“What we did by lending to the government as lender and banker of last resort is normal in any part of the world particularly when countries face crises. Any central bank, any FED will do what we have done.”

“So that we appeal to those who are exaggerating the purpose behind ways and means to take it easy with us and believe that by the special grace of God that since the president has written to the national assembly, we will eventually give the approval to allow CBN to securitize” the loans.