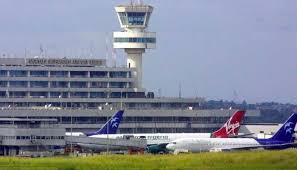 Managing Director, Aero Contractors, Captain Abdulahi Mahmood has called on the Federal Government to come to the rescue of indigenous carriers , which are getting overwhelmed with numerous challenges.

Mahmood said the challenges faced by operators need urgent intervention to save them from collapse.

The Aero Contractors boss , who decried the persistent aviation fuel crisis, said the airlines are groaning under sundry issues such as foreign exchange (forex), maintenance cost, insisting that there is need for the government to intervene.

“The situation in the sector and our position is not peculiar to Aero Contractors, the fuel situation, exchange rate, and our maintenance costs have gone up. It’s what is really happening in the aviation sector today.

“Aero Contractors is not going down. We are making efforts and I am encouraging each and everyone to focus on our plans, strategies, I have discussed with the unions and staff of Aero Contractors and I have given them assurances that we really have to come together and get this airline out of this challenging situation,” Mahmood said.

He attributed the challenges airlines are facing to low passenger turn out, which by extension has resulted in shrinking revenues for indigenous carriers.

“The challenging situation is that passengers are not travelling, the revenue is not coming as before, the prices have gone up. If you look at the unit price per seat, we are flying at less than $100 per seat while the fuel price as of today is almost about $1.3 or $1.5 per litre which is not sustainable but we are doing everything possible to get out of the woods,” Mahmood said.

While further decrying the situation, he said aviation fuel is now about 60 to 65 per cent component of a flight ticket as against 30 to 35 per cent which it used to be.

“A litre of aviation fuel as of today is N600 per litre in Lagos, in Abuja it is N650, in Kano it is N680 and in Maiduguri it is about N700 per litre and new prices started yesterday. That is what we are facing right now. It is a big monster that is

“We had several meetings from the National Assembly, NNPC, downstream and to the regulatory agency and at one point, they gave subvention or subsidy and it was N500 per litre just to cushion the effect, it was just for two weeks.”

“There was a promise that they could give the license but the process of importing the fuel to the airline is a long one. But we are in an emergency situation, this is a May Day call, this is what airlines call May Day, and when somebody calls May Day, it’s a red flag, we are in a May Day situation right now, something has to be done really fast.

“We have been crying that if something is not done the airlines may not be able to continue, if we continue with the prices because what the airlines are avoiding is not about profit, but all these things will be pushed down to the travelling public , if you increase the fuel price, ticket price will change.

“As of today, ticket price is less than $100 per seat while fuel per litre is over $1, it is not sustainable, it is a fact. If you do the unit cost with this price right now, no ticket will be less than N95,000 and it’s not that the airline is carrying 100 percent load factor, the load factor may be between 60 to 65 percent so if you carry that load factor, remove the fuel, the major component is fuel, under normal circumstance, the fuel component is 35-40 percent but the fuel component is as of today, fuel has gone to about 60 to 65 percent component of the ticket so you are left with 35 per cent to take care of landing, parking, maintenance and other charges, how is this sustainable. These are facts and numbers and this is where we are today,” Mahmood said.

He said airlines had several discussions with government about the issues where promises were made, noted that aviation fuel is not being subsidised, but deregulated.

“So everybody has his own price but I think the government should come in because aviation is the economic drive of the nation and with the security situation in the country today, we cannot afford that the aviation sector goes down. It is going to have a big negative impact on the economy. I think the government needs to do something as quickly as possible to save this industry. You can see the fuel prices as of yesterday, it’s really going up, it’s not sustainable, the government needs to act very fast,” Mahmood said.