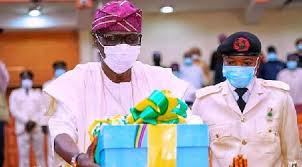 Lagos Governor Babajide Sanwo-Olu has presented N1.692 trillion as budget estimates for the year 2023 to the House of Assembly.

The budget has a capital to recurrent ratio of 55:45 per cent.

“Year 2023 is a year in which we will aggressively focus on completing ongoing projects, while also expanding our social intervention programs and support for citizens, and for micro and small businesses.

“The deficit financing shall consist of external and internal loans and bonds which are well within our fiscal sustainability parameters.

“The 2022 budget has been implemented under a tight and challenging economic scenario. We however will continue to do all we can to stabilise and further grow our economy. As our antecedents have shown, we have been able to maintain a steady pace of economic growth and development, despite the headwinds from the COVID-19 Pandemic and the Russian- Ukraine war which has further disrupted global supply chains and triggered runaway inflation across the world.

“Despite these challenges, we will continue to intensify our efforts in building a resilient economy; and it is gratifying to note that Lagos State does not lack the courage, character, conviction and creativity needed to retain its position as an economic powerhouse.

“We will keep challenging ourselves to innovate for growth. The road may be rough, but we will keep moving.”

Speaker Mudashiru Obasa, who received the Governor, promised that the House will do its due diligence on it.

He, however, said the budget should focus on improving the welfare of residents of the State.

Breakdown of the budget shows: