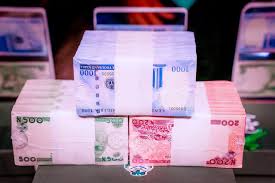 Some banks may be sanctioned over scarcity of new Naira notes

As people continue to complain on the scarcity of new naira notes lingers, the Central Bank of Nigeria (CBN), on Thursday stormed various banks’ Automated Teller Machines (ATMs) to ascertain their level of compliance with dispensing the redesigned naira notes.

This was even as the CBN said it has waived conditions for Deposit Money Banks (DMBs) across the country to pick up the new notes to ensure that every Nigerian gets the new currency.

However, the shock of the CBN staff, old and dirty notes were simultaneously coming out of the ATMs of most banks visited in the sting operation.

Only a few ATM booths had enough of the new naira notes, a development the apex bank said was totally unacceptable.

Speaking after the visit, a CBN Director and Managing Director of NIRSAL Micro-Finance Bank, Abdullahi Kure, said the monitoring of banks would continue, insisting that those found culpable of hoarding and diverting the new notes will be appropriately sanctioned.

He said: “We’re taking stock to know those getting new notes and what they are disbursing or why they’re not disbursing. We’re monitoring to know whether the banks are hoarding, diverting or not even picking the new money.

“Appropriate penalties will be meted out where infractions are determined”, he said.

On the possibility of extending the deadline, Kure said: “At this point, I can’t say yes or no”.

He added that there has been massive deployment of CBN Directors across the country to deepen sensitisation on new naira notes and cash restriction.

He further revealed that the apex bank was consulting with religious leaders and traditional rulers to secure their buy-in and ultimately make the initiatives a success.

The ATMs visited included GTCo, Access Bank and Keystone Bank, all within the Wuse area of Abuja.

At the Access Bank in Wuse, the Operations Manager, Ugo Chinenye, denied hoarding the new notes, stating that the bank loads the ATMs according to the volume of the new notes it receives from the apex.