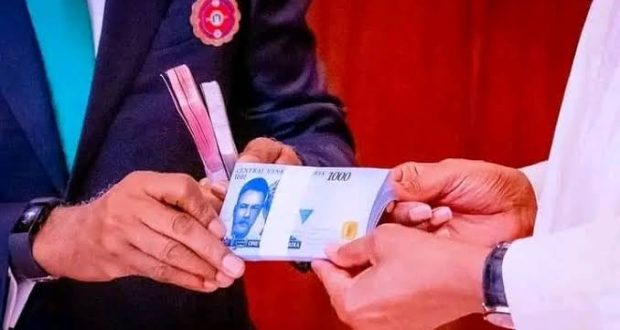 In spite of  appeals by the Central Bank of Nigeria (CBN) to market men and women to embrace the new Naira notes, its rejection is on the increase.

A customer at one of the first generation banks in the popular auto spare parts market, Ladipo, Mushin, Lagos, at the weekend, had to return the new naira notes in her possession in exchange for the old N1000 notes.

The woman, who identified herself simply as Chinyere, told a newspaper, The Nation that she decided to return the new Naira notes in exchange for the old because her customers were reluctant to accept the new notes.

“This is my bank and I know many of the tellers here. These new notes aren’t popular yet with most of my customers. They are not enthusiastic about accepting it,” she said, adding that one of the new denominations stains white garments if it is wet.

Another trader, who lives in Abesan Estate, Ipaja, said the fear of fake Naira notes is what is driving people away from the new notes. A restaurat operator, who identified herself simply as Maria, said: “I am not prepared to accept the new notes now because of the possibility of having its fake version in circulation alongside the original. I went to Lagos Island to stock my shop and I was given some of the new Naira notes. I didn’t collect despite the entreaties.

“In fact, they were making jest of me, thinking that I was an illiterate. But I know what I am doing.”

The CBN had redesigned three denominations of the nation’s currency. They are the N1000, N500 and N200 notes with deadline for circulation of the old notes set at January 31, 2023.

A check at the weekend showed that most of the automated teller machines (ATMs) dispensed the old notes.

Also, the Point of Sale (PoS) machine operators continued to pay with the old notes.

“The new Naira notes are in short supply. It’s the Naira notes that we get from the banks that we also give our customers,” Titilope, a PoS operator, said.