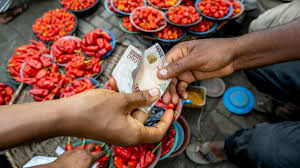 National Bureau of Statistics (NBS) has said that for the first time in 11 months, inflation has eased to 21.34 per cent in December from an all-time high of 21.47 per cent in November, 2022.

The December report shows a decline of 0.13 per cent when compared to November 2022 inflation rate.

However, on a year-on-year basis, the headline inflation rate was 5.72 percentage points higher, compared to the rate recorded in December 2021, which was 15.63 per cent.

“This shows that the headline inflation rate increased in the month of December 2022 when compared to the same month in the preceding year (i.e., December 2021).

“The increases were recorded in all Classifications of Individual Consumption by Purpose (COICOP) divisions that yielded the headline index most especially in food and non-alcoholic beverages, transport and miscellaneous goods and services,” the bureau said.

In his reaction, President, Association of Capital Market Academics of Nigeria and a former Commissioner for Finance in Imo State, Professor Uche Uwaleke, attributed the deceleration to the impact of Central Bank of Nigeria (CBN), monetary policy tightening.

According to him, the policy will linger and result in further disinflation in the coming months.

“Although headline inflation came lower in December compared to November on year on year basis, the usual demand pressure associated with the festive season was evident when viewed on month-on-month basis.