A foremost real estate company in Nigeria, Masters Reality has petioned the Federal Criminal Investigation and Intelligence Bureau, FCID at Alagbon in Lagos over the illegal demolition of the company’s property located at Iju Road, Agege.
It was gathered that the demolition exercise happened at the early hours of Friday March 5th. It should be noted that this alleged illegal act took place the same day that Governor Babajide Sanwo-Olu commissioned the Pen Cinema Bridge at Agege, Lagos.
It was learnt that the demolition was led by one Engr Toyin Omotosho who said publicly that the exercise was ordered by Governor Babajide Sanwo-Olu of Lagos State.
On getting the information of the illegal exercise taking place under his domain, the Baale (Traditional Head) of Ibari in Agege, Chief Muraina Hakeem said that he personally approached Omotosho, telling him that they were the ones who sold the land to Masters Reality, asking why they wanted to demolish a property in which the land was legally sold out. Omotosho told them the same story that the demolition was ordered by the Lagos State Governor.
During the demolition exercise, snapping was not allowed. Acccording to eyewitnesses, passers-by and residents who attempted to snap the demolition were harassed and their phones seized or damaged with supervision of Omotosho.
Our correspondents who also went to the place to perform their constitutional duties as fourth estate of the realm were almost harassed by the police operatives and LASBCA officials. The same Engr Omotosho also joined the security operatives, asking our newsmen to reveal the real identities of the persons who sent them! Threatening to arrest our correspondents. It was learnt, residents were mulling over the incident, saying that if the job they were doing is indeed legal and clean, they shouldn’t be afraid of journalists and snapping.
During the entire period of the demolition, it was gathered traffic jam grounded the area and this ended after the end of the demolition.
Another traditional leader within the axis, Baale Allen, Chief Thomas Jaji also complained about the controversial demolition to Omotosho who replied that the pressure was from the state government who ordered him to carry out the alleged illegal act.
A senior staff within Lagos State Secretariat at Allausa Ikeja, who pleaded anonymity denied the statement of Omotosho, saying that he doesn’t believe that Governor Babajide Sanwo-Olu gave such order. The senior government official added that Omotosho is a man well known within the circle of government for this kind of illegal and criminal activities.
“I can vividly recall that during the administration of Governor Akinwumi Ambode, the former Governor dismantled the office of Omotosho, instructing him to leave Lagos immediately so as not to keep on tarnishing the image of his government. You won’t believe that there is hardly any police station in Lagos that doesn’t know Omotosho for criminalities and gross abuse of power.
“There was a time, the Assistant Inspector General of Police, AIG, Zone two Division Lagos, ordered his arrest and they handcuffed him.
“Therefore, how he found his way back to Alausa governor’s office up till now is a shock to some of us at the secretariat,” The senior staff stated.
It was reliably gathered by The advocate.ng that the official job of Omotosho is to be tollling damaged and abandoned vehicles; thus, how is now demolishing houses is a great concern and needs to be investigated thoroughly.
The force CID, upon receiving the petiion, invited Omotosho who claimed that he was acting on the order of the Governor. Also, it was learnt that the Chief of Staff to the Governor of Lagos, COS, called the office of CID Alagbon, saying that he doesn’t know anybody bearing the name Toyin Omotosho.
However, Investigation about the controversial demolition exercise still goes on.
Masters Reality in a statement on Wednesday called on the State Governor, Babajide Sanwo-Olu to swiftly use his good office to Investigate this matter so as not to dent the good image of his government 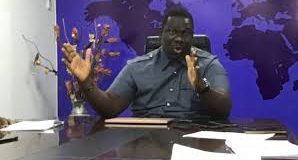 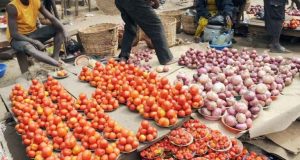 Rising Prices of Foodstuffs and Ineffective Economic Policies in Nigeria

“We Have Challenges, But Seperation Not the Solution,” says Omotola as he Unveils ‘Pro-Nigeria Group’ on June 12