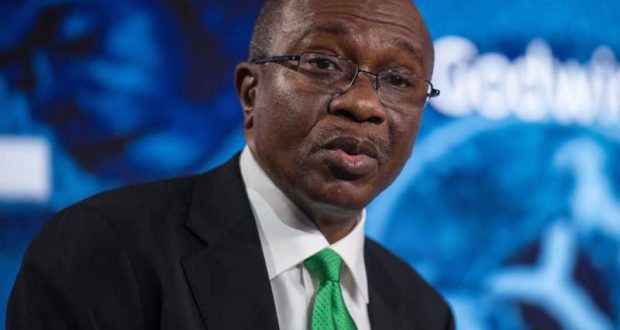 A pro-Muhammadu Buhari group, Nigeria First Movement has called for the resignation or sacking of the governor of the Central Bank of Nigeria (CBN), Mr Godwin Emefiele.

According to the supporters of the President, doing so will save the nation from further economic meltdown.

CBN Governor, Godwin Emefiele
Group Coordinator, Augustine Richard in a statement said the latest introduction and subsequent launch of the digital currency, eNaira by Emefiele is the “final nail in the country’s already doomed economy.”

Since the release of the eNaira, the app has received negative reviews from Nigerians, who were disappointed with the tedious registration processes as part of the requirements.

The group also urged the CBN Governor to resign over his alleged inability to stabilise the country’s bleeding economy.

It threatened to mobilise over 200 other pro-Buhari groups across the globe for a ‘mother of all protests’ that would hold simultaneously in Abuja, Lagos and London, UK against Nigeria’s poor economic posture if Emefiele failed to resign or get sacked.

“Emefiele may have made history as the only governor to be re-appointed for a second term in office since the nation’s return to a democratic rule, however, he is best known for surrendering much of the bank’s independence, running a monetary policy that had record negative impact on the economy,” Richard said.

“The introduction and subsequent launch of the digital currency, eNaira, is perceived as the final nail in the country’s already doomed economy.

“We are ready to champion the call for Emefiele’s removal by staging a one-week protest that could potentially cripple economic activities in Abuja. We’re also ready to mobilise over 200 other pro-Buhari groups across the globe in the ‘mother of all protests’ that would hold simultaneously in Abuja, Lagos and London against the nation’s poor economic posture.

“Emiefele played a pivotal role in the collapse of the economy since his appointment as the CBN chief and before his arrival, the economy was said to be one of the fastest growing in the world. Shortly after his reappointment in 2019, Emefiele announced a five-year plan that targets double-digit growth in one of Africa’s largest economies.

“His approach to policy implementation, however, has left many in doubt, raising questions on how his key policy move, especially in the context of management of the exchange rate, benefits the economy, and the naira he sought to protect.

“On July 24, 2020, the CBN launched a series of non-intrant loan schemes under the AGSMEIS, MSMEDF, AADF and other loan schemes. The program attracted a lot of Nigerians, with millions of them seeking to join the program through all due process. For more than a year now, nothing has been done. The CBN under Emefile has shirked its primary responsibility of ensuring price stability and has embraced a more developmental role, in the hopes of naira stability.

“As confirmed by the Chairman of the House of Representatives Committee on Finance, Rt. Hon. James Faleke, the CBN has failed to submit its Audited Account to the Office of the Auditor General (OAGF) for review, from 2010 to date.

“According to Kalu Ajah, chief executive officer at AfriSwiss Capital Assets Management Limited in Abuja, the CBN has pursued a strong naira policy and had sought to dampen imports. Well, imports have not declined and the naira is far from strong. One wonders if the import restrictions on items and capital controls were necessary or if the CBN should have devalued the naira earlier. I will say Nigeria did not benefit from the capital controls regime.

“The regulatory bank’s aggressive lending policy has been called into question as well, causing some concerns over the bank chief’s stewardship of the banking sector. The CBN is forcing banks to lend, and penalising non-lenders. These are shareholders funds being deployed via fiat.

“In October last year, the Central Bank fined 12 banks, including Citibank, First Bank of Nigeria, Guaranty Trust Bank, and Standard Chartered Bank N499 billion for failing to meet lending targets. It is another move that attracted criticism across the board.”

Richard added that the N500 billion which was stolen in a private Dubai investment towards the end of 2018 should be investigated by the President as well as other funds that went missing during Emefiele’s administration.