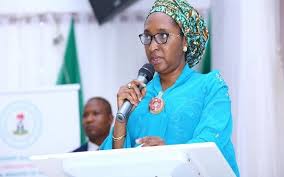 The Minister for Finance, Budget and National Planning, Mrs Zainab Ahmmed has disclosed that henceforth it would charge offshore companies providing digital services to local customers in Nigeria a six per cent tax on turnover as provided in the 2021 Finance Act.

She made this known  during the public presentation and breakdown of the 2022 budget held in Abuja.

Also, Ahmed disclosed that as of November 2021, the government had surpassed all collections for its independent revenues from 2017 to date, which according to her reflected the performance of government’s revenue growth initiatives.

“We have now for the first time surpassed the 1 trillion mark collection for independent revenues (N1.104tn) collected as at November against a budget target of 973.41bn). Analysts have always considered our projections unrealistic, but we have always insisted on the potentials that exist to grow FGN independent revenues,” she revealed.

Speaking further on the tax on digital services, she explained that it includes apps, high frequency trading, electronic data storage and online advertising, adding that, “this is introducing turnover tax on a fair and reasonable basis.”

The new policy is contained in Section 30 of the Finance Act which amended the provisions of Section 10, 31 and 14 on VAT obligations for non-resident digital companies.

Ahmed said, “Section 30 of the Finance Act designed to amend section 10, 31 and 14 of VAT is in relations to VAT obligations for non-resident digital companies and the mechanism that will be used is to restrict VAT obligations mainly to digital non-resident companies who supply individuals in Nigeria who can’t themselves self-account for VAT.

“So if you visit Amazon, we are expecting Amazon to add VAT charge to whatever transaction you are paying for. I am using Amazon as an example. We are going to be working with Amazon to be registered as a tax agent for the FIRS.

“So Amazon will now collect this payment and remit to FIRS and this is in line with global best practices, we have been missing out on this stream of revenue.

According to her, the new law applies to foreign companies that provide digital services such as apps, high-frequency trading, electronic data storage, online and advertising, among others.

She noted that in line with Section 4 of the Finance Act, non-resident companies are now expected to pay tax at six per cent per cent on their turnover.

The minister who stated that the government was desirous of modernising taxes for its digital economy and to improve compliance, noted that digital non-resident companies do not need to be registered locally but would have an arrangement with the Federal Inland Revenue Services(FIRS) to collect and remit taxes in a bid to reduce the compliance burden.

She also disclosed that the federal government has introduced an excise duty of N10 per litre on all non-alcoholic, carbonated and sweetened beverages in the country.

The minister stated that the charge on beverages was also a new policy introduced in the Finance Act which was signed into law by President Muhammadu Buhari on December 31, 2021, alongside the 2022 Appropriation Bill.

The minister pointed out that the new sugar tax was introduced to raise excise duties and revenues for health-related and other critical expenditures in line with the 2022 budget priorities.

The aimed according to her, was to also discourage excessive consumption of sugar in beverages, which contributed to diabetes, obesity and other diseases adding that the Finance Act had also raised excise duties and revenues for the health sector.

She also said that a provision had been made under the Act to reinforce the FIRS mandate as the principal tax collection agency while collaborating with other law enforcement Ministries, Departments and Agencies (MDAs).

Speaking further, Ahmed expressed the preparedness of the federal government to conduct the national population and housing census, which was last held in Nigeria over 15 years ago.

Ahmed had in November last year disclosed that the sum of N178.09 billion had been approved for the national population census in the 2022 budget.