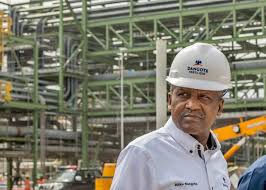 Bloomberg Billionaires Index data shows that the wealthiest black man in the world now has an estimated net worth of $20 billion and posted gains of about $915 million in the first quarter. Additionally, he ended the first quarter as the only African among the top 80 richest people in the world after launching a fertilizer plant last week.

The 64-year-old billionaire’s current net worth is the equivalent of 10.4 million troy ounces of gold or 191 million barrels of crude oil.

Dangote was born into a wealthy Muslim family of traders in the northern part of Nigeria from where he set up his own business selling cement when he was 21 years old. His switch to manufacturing building materials in the 1990s was prompted by government policies encouraging reductions in imports.