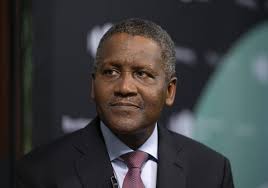 Dangote Group recently rewarded its customers with N21million and other attractive prizes in Port Harcourt, Rivers State. This was revealed during the Dangote Cement Bag of Goodies Promo 3 Consumers Promo in Port Harcourt

Three customers who were presented with a symbolic cheques got their accounts credited with N5million each live at the brief but colorful event, while six others likewise received N1million credit ban alerts each.

Ademola said, “The first is the instant prize winners and you saw us giving out refrigerators, generators, Television sets, and rechargeable fans. We have like six people who won those prizes this afternoon.

Ademola said the promo was to reward some of loyal customers and people who have been with the Dangote Group for years.

“And like you know, our President, the Chief Executive Officer of Dangote Group is always out to empower people. So we see this promo as a way of empowering some of our retailers, our customers in trade.

“This gesture, we believe will increase the wealth, because when you empower people, like what we have done now, they too will be able to employ two or three people more.

“For example those who won five million naira, you heard me advising them to please invest this money in a profitable business, of course they should invest in Dangote Cement business so that at least so that you too can expand your business,” he stated.

Asked what the import of the promo has been he said, “We (Dangote Cement) have experienced increase in sales as a result of this promo and our customer loyalty has improved too.

“Like some of the winners said, that some people don’t believe. Now they have seen that this promo I real.

“Anything Dangote said he is going to do; we will do it. So we congratulate the winners and encourage more Nigerians to come on board because Dangote Cement is the leading brand,” he said.

In her remark, the Principal Administrative Officer, National Lottery Regulatory Commission, Linda Oko said she was at the event to ensure that the promo was credible. Oko added, “From what we have observed from the beginning since we arrived here, it is credible.