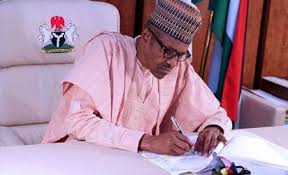 President Muhammadu Buhari has approved the re-appointment of the entire Abba Bello-led Executive Management of the Nigeria Export-Import (NEXIM) Bank.

According to a statement by the Special Adviser, Media and Communications, to the Minister of Finance, Budget & National Planning, Yunusa Tanko Abdullahi, the management teams new five-year term would take effect from April 10, 2022.

The statement, which pointed out that the end of the first five-year term of the team would be marked on April 9, also noted that its reappointment followed the provisions of Section 11(4) of the NEXIM Bank Act.

The statement, dated March 31, 2022, said “the re-appointment of the entire executive management of Nigeria Export-Import (NEXIM) Bank has been approved by President Muhammadu Buhari.

“The re-appointment follows the fact that the members of the current management of the bank were appointed on 10th April, 2017 and their first five-year term is due to expire on 9th April, 2022.

“Accordingly, as the expiration of the first term drew near, it became necessary to appraise their performance since assumption of duties across the core mandate areas of the bank for the purpose of their re-appointment or otherwise.

“The outcome of the appraisal revealed that the current management team with the support of the board has performed as well as exemplified by key achievements.

“There is an enhanced liquidity position of the bank through additional funding totallingN103.755billion from Central Bank of Nigeria (CBN), N3.936billion from Federal Ministry of Finance, US$50million from the Nigerian Content Development Management Board (NCDMB) and US$25million from the African Export-Import Bank.

“The NEXIM has also made high growth in recoveries from N40.780million in 2016, preceding the current management to an annual average recovery of N1.243billion between 2017 and 2020 and a total collection of N11.903billion for the five-year period.

“The bank has made the disbursement of a total sum of N144billion in loans to export-oriented entities in the non-oil sector while accounting for approximately US$375million as export proceeds within the period under review.

“The NEXIM bank has been ranked among the best three Development Finance Institutions (DFIs) and best five public institutions surveyed based on the Independent Corrupt Practices and Other Related Offences Commission (ICPC) Anti-corruption Assessment Criteria.

“In view of all the achievements, the current executive management team as constituted has turned around the fortunes of the bank and re-positioned it on the path of prosperity towards a better realisation of its mandate,” the statement reads.