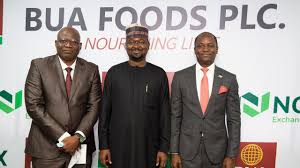 BUA Foods Plc has released its 9-months financial statement for the year ended September 30, 2021, with the Nigerian Exchange Limited (NGX).

The top-notch company records a 6.68% growth in Profit After Tax from N15.53 billion recorded in the corresponding period of 2020 to N16.56 billion in the period reported.

The FMCG company, reported revenue of N79.70 billion, reflecting a growth of 6.84% from N74.59 billion in the corresponding period of 2020. In the same period, the company’s operating profit stood at N21.25 billion.

The financial statement revealed that revenue from sale of Non-fortified Sugar during the period grew by 152.62% from N22.77 billion to N57.52 billion, while revenue made from fortified sugar declined to N21.25 billion down from N51.73 billion in 2020.

Net profit for the period was supported by the decline in some administrative expense line items as revealed in the statement.

Administrative expenses for the period depreciated by 43.12% from the prior-year period, supporting the operating profit and subsequently, profit after tax.