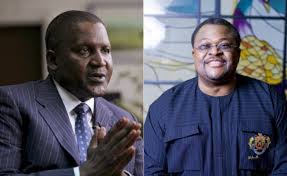 Abdulsamad Rabiu has recorded a significant boost in his worth as his stake in the newly listed BUA Foods gained N420.49 billion in a single week.

The share price of BUA Foods, increased by 65% in one week after listing on the floor of the Nigerian Stock market to trade at N66 per share as of Friday 14th January 2022, compared to its listing price of N40 per ordinary share in the previous week.

According to the information contained in the company’s listing memorandum, Abdulsamad Rabiu controls about 89.849% of BUA Foods holding, owning a total of 16.17 billion units of shares from the total 18 billion listed shares.

It was also gathered that his networth was around N646.9 billion in the previous week has now grown beyond the N1 trillion threshold, to stand at N1.07 trillion as of the end of trading activities on Friday.

It was learnt that that, Abdul Samad Rabiu overtook Mike Adenuga to become the second richest man in Nigeria.